Whether professional or recreational, any strength athlete can experience an ‘immune crash’ during periods of intense, heavy, or high volume training as he or she loads the body above habitual levels in an attempt to get stronger, quicker, or more powerful. But how is it possible to avoid getting ill while still continuing to push the boundaries in your chosen sport whether that’s powerlifting, football, or bodybuilding? Well, generally speaking, it’s accepted both through anecdotal and epidemiological evidence (the branch of medicine that studies cause of disease) that moderate, regular training can reduce the risk of infections by having a positive effect on the immune system. Therefore, you can avoid this ‘crash’ in immune health.

So here we take a look at just what exactly goes on inside the body during periods of intense strength training and address everything from the impairment of natural killer cell activity to lymphocyte production. Then we’ll examine the supplements and science that can help. 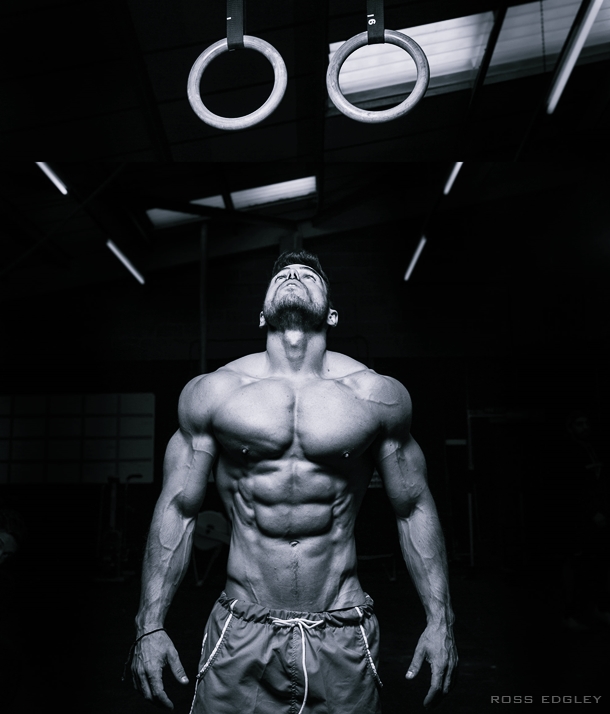 A study conducted in Australia at the Department of Human Movement Studies at the University of Queensland set out to determine the effects of exercise intensity on immune parameters in order to better understand mechanisms by which training may influence resistance to infection. It was found that intensive exercise altered a number of immune factors including circulating leukocytes (more commonly known as white blood cells). The chief function of leukocytes is to protect the body against microorganisms causing disease.

To use a team sports metaphor, this is like trying to defend with five fewer players (leukocytes) on the field than your opposition (the virus or bacteria). While you’d be able to do it, you massively increase their chances of getting the ‘W’ (ultimately you becoming ill).

Plasma cytokine concentrations were also detrimentally affected. Cytokines are basically any number of substances that are secreted by specific cells of the immune system, which carries signals locally between cells. They are deemed critical to the development and functioning of both the innate and adaptive immune response, so altering them effectively alters the ‘communication’ of the immune system (Gokhale 2007).

In keeping with the team sports metaphor, it’s like trying to defend while being slightly blindfolded and told to put ear plugs in so that you can’t communicate with your teammates. Again, you’d be able to do it but not very well and the chances of the opposition scoring (infection occurring) is dramatically increased.

Scientists from the Athletic Club of Bilbao in Basque, Spain (from the research and development department) set out to further examine various hormonal markers such as testosterone and cortisol, the testosterone/cortisol ratio, the 24-hour urinary cortisol/cortisone ratio, urinary and plasma catecholamines, insulin-like growth factor-1, and growth hormone (Padilla 2004) during long periods of intense training. They discovered that the changes caused by overtraining can’t correlate with changes in an athlete’s performance capacity and can create a hormonal environment (specifically citing elevated cortisol levels) that allow pathogens (disease producing agents) to multiply and thrive. This is because specifically both cortisol and epinephrine suppress T-cell cytokine production. To again use the team sports metaphor, this is now like your team playing with five fewer players, all blindfolded and with ear plugs in, and now they’re being told to play against Russia’s national team in minus 20 degrees, an environment that clearly favors the opposition (the opposition being cortisol and epinephrine).

Ultimately, all the above means that sore throats and flu like symptoms are more common in athletes than in the general population (Heath 1991), and once infected, colds may last longer, therefore detrimentally affecting training and performance (Pedersen 1995).

More specifically and very common in athletes is something known as upper respiratory tract infection (URTI), a form of illness that’s caused by an infection of the upper respiratory tract (namely nose, pharynx, sinuses, or larynx). To date, there have been many studies examining URTI. However, most have consisted of a self-reporting questionnaire to evaluate the effects of intense, prolonged exercise on people’s infection incidence. This form of analysis is quite subjective and has been criticized by sports scientists because it doesn’t account for other factors such as inhalation of air pollutants, allergies, and airway inflammation, to name a few. This is why researchers from the University of Queensland in Brisbane, Australia, set out to objectively study the pathogenic etiology and symptomatology of URTI in highly trained elite athletes, recreationally competitive athletes, and an untrained sedentary control group.

They found that a total of 37 URTI episodes in 28 subjects were reported, nine in the sedentary control group, seven in the recreationally competitive athletes group, and 21 in the elite athletes group. However, of these 37 cases of URTI, infectious agents were identified in only eleven (30 percent)—two control, three recreationally competitive exercisers, and six elite athletes. No pathogens were identified in 26 episodes of URTI. Specific symptoms, total symptoms, and functional impairment severity scores were higher in subjects with an infectious URTI episode. These findings strongly suggest that URTI in elite athletes is seldom infectious, and the symptomatology is distinct between infectious and noninfectious. In future research, noninfectious causes of URTI should be considered and investigated to identify alternative mechanisms and mediators. However, this study does support the notion that moderate regular training can reduce the risk of infections by having a positive effect on the immune system.

Therefore, you can avoid this ‘immune crash,’ specifically URTI, whereas sedentary and elite individuals are more prone due to a suppressed immune system. Essentially, this supports the often quoted J-shaped model that shows how immune health is affected by exercise intensity. 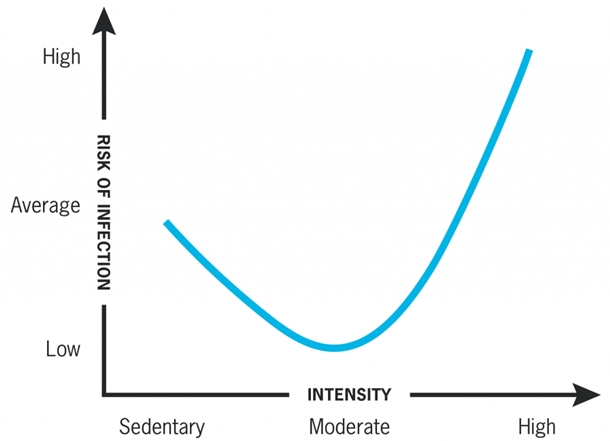 “J” shaped model of relationship between intensity of exercise and risk of URTI (Infection). This model suggests that moderate exercise may lower risk of respiratory infection while excessive amounts may increase the risk.

We’ve identified what happens inside the body when the immune system of an athlete is suppressed. So what means and methods are there for preventing or combating it?

A well designed or periodized training regime is vital. In this case, prevention is most definitely better than cure. However, as all serious athletes will know first-hand, when pushing your body to the absolute limit, even the most well-designed conditioning routine can fail to support the immune system enough.

It’s at this point that studies show certain supplements can help.

Studies from Bente Pedersen’s group in Copenhagen found that the release of interleukin-6 (IL-6) from contracting muscle can be improved by long-term antioxidant supplementation. IL-6 is an interleukin that acts as both a pro-inflammatory and anti-inflammatory cytokine and plays critical roles in the immune response (Hirano 1990). In a single blind, placebo-controlled study published in The Journal of Physiology, it was reported that four weeks of oral supplementation with a combination of vitamin C (500 mg/day) and vitamin E (400 IU/day) markedly attenuated the release of IL-6 from active muscle and the plasma IL-6 and cortisol response to three hours of dynamic, two legged knee extensor exercise at 50 percent of maximal power output compared with the placebo. High levels of circulating IL-6 stimulate cortisol release, and this study provides some strong evidence that the mechanism of action of the antioxidant supplementation was via a reduction in IL-6 release from the muscle fibers of the exercising legs. Attenuating the IL-6 and cortisol response would be expected to limit the exercise-induced depression of immune function, and this may be the mechanism that could explain the reported lower incidence of URTI symptoms in athletes supplemented with vitamin C (alone or in combination with other antioxidants) compared with the placebo (Christian 2004).

On the topic of supplementation and cytokine response, researchers from the Immunology Center at Loma Linda University Medical Center in California found that the consumption of carbohydrates during exercise also improves increases in plasma IL-6, catecholamines, ACTH, and cortisol. More specifically, it was shown that consuming 30–60 grams of carbohydrate per hour during 2.5 hours of strenuous exercise prevented both the decrease in the number and percentage of IFN-?-positive T lymphocytes and the suppression of IFN-? production from stimulated T lymphocytes observed on the placebo control trial. IFN-?-positive is a cytokine that is critical for innate and adaptive immunity against viral and intracellular bacterial infections.

So again, by supplementing with carbohydrates (more precisely 30–60 grams of carbohydrate per hour during 2.5 hours of strenuous training), you’re able to improve the efficiency of the immune system while still continuing to train at a high intensity and toward the higher end of the J-shaped model. 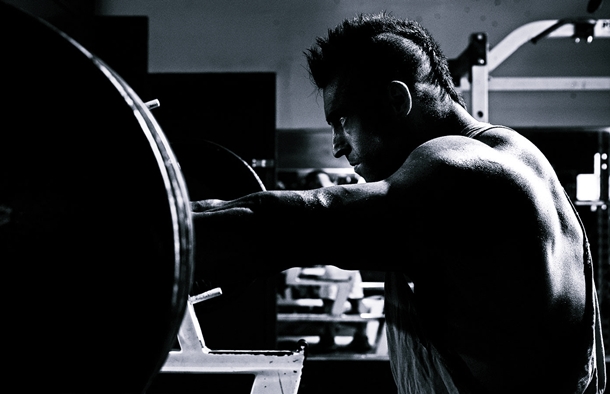 The final supplement that’s been specifically recommended by sports nutritionists when talking about overtraining and immune system suppression is branched chain amino acids (BCAAs). Scientists from the Institute of Biomedical Sciences at the University of São Paulo in Brazil set out to determine how intense long duration exercise could lead to immune suppression through a decrease in the circulating level of plasma glutamine and how the decrease in plasma glutamine concentration as a consequence of intense long duration exercise was reversed, in some cases, by supplementing the diet of the athletes with branched-chain amino acids.

Although this particular study was conducted on endurance athletes, the scientific theory is still applicable to strength athletes involved in high volume conditioning.

Overtraining and immune system suppression are very overlooked aspects of training. By understanding your immune system and how it works, you’re better able to stay healthy and keep progressing with your lifts without the setbacks of becoming ill.