There were three motivating factors that sparked my desire to get into bodybuilding. The first was my older brother Rich. He was in fantastic shape as I was growing up and he worked out in our basement with some free weights and a universal set he purchased. It took many years of me pestering him before he gave in and showed me what to do lol I remember he had Flex magazine issues scattered all over his bedroom floor. One day I opened an issue up and I saw Edwardo Kawak The guy was FREAKY huge!! I remember being so obsessed with looking like that after seeing that image!! When I became a senior in high school my friend Alberto competed in a bodybuilding contest at our school and I remember asking him endless questions about training and he took me under his wing and eventually he and I became training partners.

We had some serious wars in the gym and we pushed each other past our deepest limits.

Alberto was without a doubt a major influence on me and helped spark that love for bodybuilding in me. But there was one more influence. Alberto told me to turn on ESPN at 1 am on a Friday morning. I was like “why dude, I have class in the am”? He said “trust me”. So in 1992 at 1 am on a Friday is when I first saw “American Muscle Magazine”. The show changed my life forever. It highlighted upcoming bodybuilders from that era, they did contest coverage, workouts with the pros, supplement reviews and so much more!! After that the meathead in me grew to unprecedented levels and I never looked back

I have an innate desire to set and achieve goals. I love training in itself, the feeling of accomplishing an extremely tough workout, and I love the challenge that bodybuilding provides me.

I used to be a “HIT” advocate until I tumbled across a style of training that alternates one week of a powerlifting type of workouts with a focus on compound exercises, low reps, longer rest periods between sets and low volume  with one week of insane intensity WITH higher volume, more failure sets, beyond failure techniques and get a skin bursting pump.  The fancy term for this style is called “Non Linear Periodization”. I also believe in training one or at the MOST two body parts per workout. 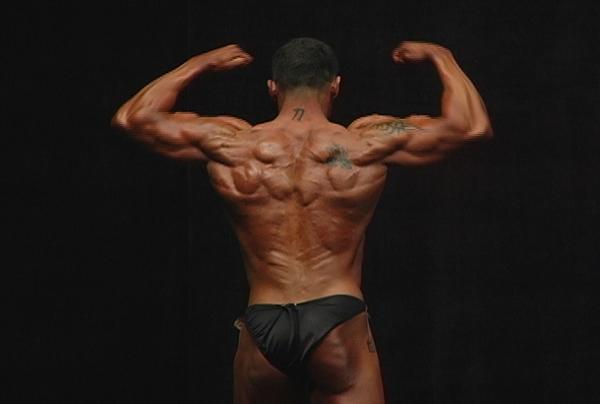 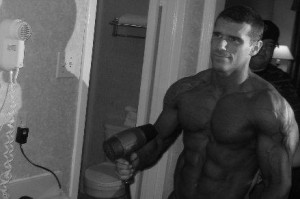 I prefer HIIT myself, unless its pre breakfast then I go for a traditional steady pace, longer duration version. I’ve been experimenting with the AST form of cardio. Basically what they do is focus on doing 16 minutes of interval training and record the distance and calories at the end. Then the next time you come back to do that cardio again you have to out do your distance and calories. I’ve altered their version and do 20 minutes instead of 16 and always do it on the treadmill, I feel I get a much better metabolic response running then cycling.

I believe in eating clean year round (with occasional cheating in the off-season) I believe the faster your metabolism the higher the carbs should be. Right now I’m 17 weeks out from a contest and my Macro’s are 310 carbs, 310 protein and 50 fat with one re-feed day of 400 carbs. As the contest draws near I may be eating 400-450 carbs daily to not loose anymore. I believe in being ready 3-4 weeks early and INCREASE food as the show draws near so I can fill out AND get harder at the same time, rather then restrict myself for 12 miserable weeks and sprint to the finish line and risk loosing muscle.

Have you ever suffered an injury?

Yes actually, I suffered an INTENSE injury back in December of 2008. It was a cold day on Long Island NY and I was supposed to do sumo deadlifts. As I walked in I saw IFBB pro Collette Nelson talking to her workout partner and she said “on a day like this, you want to make sure you warm up properly”. Wow if only I heeded her warning. I did a few light warm up sets and then I started piling the weight on the bar. Now usually I add about 40-60 pounds per set and gradually work my way up to some heavy duty singles. But on this faithful day I started going up 70-100 pounds per set. On my last “warm up” set with 515 my partner flat out told me “Your form sucks, drop your hips more, keep your back straight and EXPLODE up”. I said “ok” and told him “throw 560 on the bar”. He looked up a lil shocked/worried “you sure man”?  “yup just do it bro!!”. So I start to pace back and forth and get PISSED ..I had to beat my pervious best by 555 didn’t I? Even though I was far from 100% on that day!!

So I walk up, strap up start screaming …ONE TWO UP!!!!! I exploded upward and got the bar about 2 inches off the ground and I heard a loud “pop” and saw BOTH of my quads bend inward.

F*CK SH*T F*CK is all I could muster as I fell to the ground in annoy. The whole gym including Collette rushed to my side. Multiple people called 9-11 and I tried  several times to stand up to only have flaccid legs stare back at me from the ground. The ambulance came and rushed me to the hospital. My quads were THROBBING at this point and all I kept saying to myself was ‘please don’t be torn, please don’t be torn”. As I was in the ER I noticed a jacked up doctor probably 240 pounds lol walk up to me pinch both my quads and muttered “sorry bro you tore both of them”. My heart sank and I cried. I couldn’t believe it. After 18 years of training balls to the walls I managed to tear the ONE bodypart(s) I was trying so hard to improve. I spent the next 48 hours in the hospital with a plethora of questions. “When could I train again?, can I ever squat or deadlift heavy again? would I ever be able to bodybuild again”?

The orthopedic surgeon was less then optimistic about my return. He did the surgery on new years eve and the day after the surgery I had to attempt to walk with the help of a physical therapist and a walker.

If it wasn’t for my strong upper body I never would have been able to get in and out of bed relatively easy like I did. After a week in the hospital I went home. My wife made the apartment “walker proof” and besides showering with garbage bags on my legs and going to the bathroom I was bed ridden and doped up on percocets until physical therapy started two weeks later. I remember I had one lone 25 pound dumbbell at my apartment that I began to use to try and “maintain” my muscle. It didn’t help too much considering I still lost 18 pounds in 2 weeks!! when I began physical therapy at Generations in West Islip I remember Kevin the owner used to work out at the same old hardcore gym I did back in the day “Olympic Health Club”. I asked Kevin if he thought I could get back onstage again someday and be able to lift heavy on squats or deadlifts. He responded “yeah without a  doubt”. That’s all I needed to hear and the next 6 weeks I pushed myself as hard as I could to get better. The staff was amazed at how fast I was progressing. I began lifting again at the gym leg braces and walker and all. I was pathetically weak at first but every single week I added a little more weight to the machine or grabbed a few heavier dumbbells. It wasn’t long until my upper body was close to what it was before the injury. My legs on the other hand remained very thin until the last 4 months where I was able to really push them with some decent poundage and good depth. The road I traveled has been remarkably tough, but I came through the other side because I believed I would someday ‘be back”. And come June 19th I will have proved my Doctor wrong!!!! 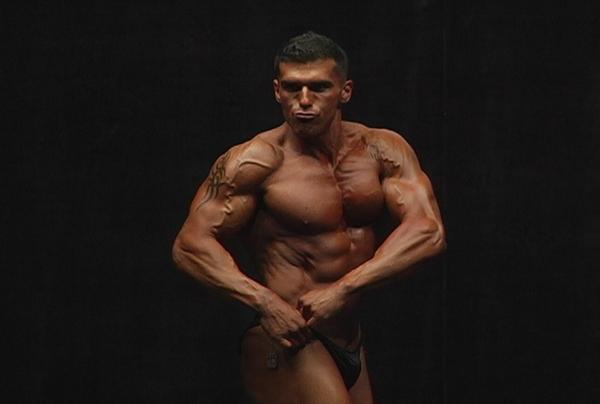 I make a killer oatmeal pancake!!! Absolutely the best! I also make really good sweet potato fries that are awesome!!

I love all kinds of music but my preferred workout music is House!!

“What does not kill me makes me stronger”