No matter how long you’ve been training, the issue of carbs is always a thorny one.

Well-read bodybuilders know that even though processed-grain products like white bread have their place in a diet (such as postworkout), whole grains, like oatmeal and brown rice, are generally the better choice for most meals. But what about “new” grains, such as quinoa? If it stood toe to toe with the vaunted brown rice, which would be crowned the victor? 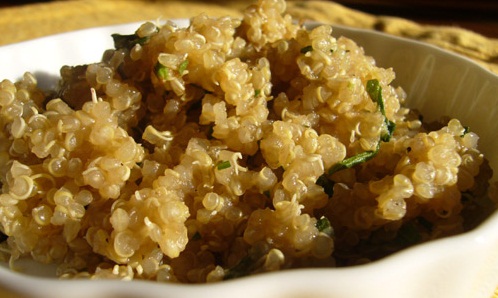 Before we get to the reason, we want to clear up one tiny, niggling detail. Quinoa isn’t technically a grain. It’s the seed of the goosefoot plant, a relative of spinach; it’s been cultivated in the Andes Mountains for thousands of years–but because it is physically similar to grains and can be ground into flour, it’s called a pseudograin.

Quinoa dominates just about all whole grains because it has lysine, one of the nine essential amino acids that you must get from your diet because your body can’t synthesize it. 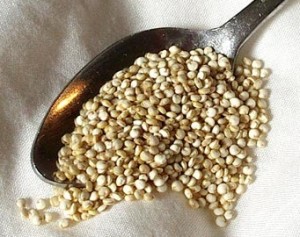 Other grains have some lysine content, but not enough to count; quinoa’s lysine content is sufficient for it to be considered a complete protein. If you make quinoa the side dish to a chicken breast, you’re not only getting all the benefits that a whole grain offers (no insulin spike, increased satiety, reduced risk of cardiovascular disease, improved gastrointestinal health); you’re also getting an extra serving of high-quality protein.

If that were all quinoa had going for it, it would still beat brown rice hands down. But there’s more. In a study conducted in 2002, researchers found that eating quinoa was associated with an increase in insulinlike growth factor-I levels. IGF-I is intimately tied to muscle growth.

Quinoa also has higher levels of micronutrients that are implicated in muscle growth.

Magnesium not only helps maintain the muscle you have, but also plays a role in creating more muscle. Potassium, a mineral that assists in pulling fluid from the bloodstream into muscle cells (creating a pump), is also important to recovery after exercise. And folate, which is one of the B vitamins, is required for muscles to make new cells. That is exactly what it does after every workout.

This table compares the nutrient and amino acid contents of 1 cup cooked quinoa and 1 cup of cooked brown rice. 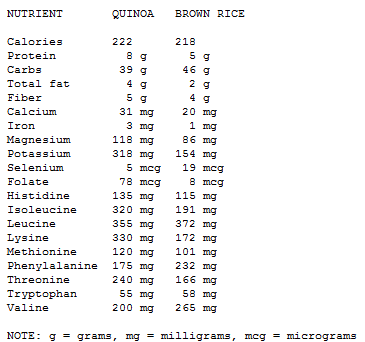