Previous Next
This article was published in Flex Magazine, August 2008 issue

Once upon a time 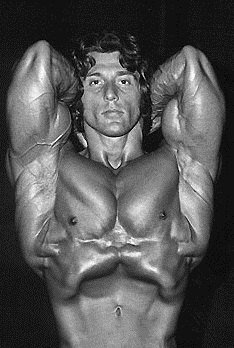 Not so long ago, a group of men walked the Earth who, in appearance at least, didn’t resemble typical men so much as they did the classical imagery we’ve come to associate with Zeus, Hercules and Poseidon. Proud and assured, these veritable demigods stood as icons upon whose images in well-worn magazines scrawny kids would gaze in the hopes that they too might one day possess the kind of physique that would make women swoon and men envious. Colloquially, these men were referred to as “bodybuilders.”

During the late-’70s, in the pre-Grand Theft Auto/TapouT/Jose Canseco-tell-all/Jackass days, there was one particular bodybuilder who embodied the ancient gods like no other before, or since.

Indeed, he himself would ascend to the top of Mt. Olympia on three consecutive occasions 1977, ’78, ’79 and almost singularly defy a trend in his sport toward the kind of unadulterated mass that some believe has tainted bodybuilding in the years since his retirement. Standing 5’9″ and tipping the scales at around 190 pounds, Frank Zane was as good as it got in body-building at a time when the sport was about building an ideal physique, not an overwhelming one. Every inch of his musculature was in aesthetically pleasing proportion with the rest, almost as if sculpted by a divine master artisan who deigned that man, in his dreams of achieving physical perfection, should have a living example to which to aspire. A rising deltoid here; a tapering waistline there; striations all around.

The Zane physique was to bodybuilding what the Maserati Quattroporte is to driving. 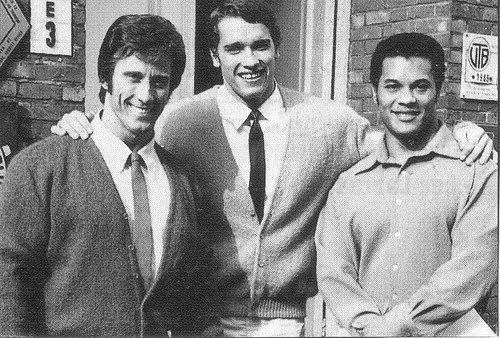 Despite the fact that nearly three decades have transpired since Zane’s last Olympia win, his physique remains timeless, as respected by bodybuilding fans today as it was then. His name is still consistently invoked for reference when discussion among bodybuilding fans turns to what an ideal physique “should” look like. Even his bodybuilding philosophies, which center around the idea of maintaining a holistic mind-body connection (as opposed to the more body-centric impulses of some of his less sentient brethren) is the model by which others are measured.

We recently had the opportunity to talk to Frank, who turned 66 on June 28, about the training that helped create the “Zane look.” In an exclusive to FLEX, he shares a host of never-before-published photos spanning his career and beyond, taken by his wife, Christine, a talented photographer and his most ardent supporter for more than 40 years.

How did you come to formulate your first training routine?

It was all by people I’d met, things I’d read and trial and error. When I first started out, I was about 18 actually younger I was about 16 or 17 when I really got serious. I worked out every other day after school, doing upper body one day, legs the next. I kept that routine for a while and it worked well for me. Then, in the mid-late ’60s, when I was living in Florida, I increased the number of workouts so that I was training six days a week, but it was still upper body one day, legs the next.

My upper-body workouts took about three to three and a half hours. The leg workouts were about an hour and a half, and that’s how I trained right up until I won the Mr. America and Mr. Universe in 1968.

When I moved to California, we all pretty much trained the same way, like Arnold did. We still trained six days a week, but on a three-way split. A typical routine was chest and back on Mondays and Thursdays, legs on Tuesdays and Fridays. Wednesdays and Saturdays was delts and arms. It was a volume routine. We’d do at least 10-12 sets for the small bodyparts and 15-20 sets for the large bodyparts. We’d train heavy, working up to the heavy weights. We worked real hard, but what I learned was that as you get older it’s better to train a little less frequently but harder. Your body needs that extra time to recuperate.

Around 1978, I graduated to a different style it was still a three-day split program but I trained three days in a row and then rested the fourth day. I found that I grew better on a routine like that and it’s the one that I used throughout the rest of my career. Precontest I, like most everyone else, would do a double split, but normally it would be one workout a day, maybe coming back to do abs. So I changed it to back-biceps-forearms on day one, legs on day two, chest, shoulders, triceps on day three.

Of course, I always worked abs every day, and did a good 400 and upward for total reps of abs. Before a contest, I’d move that up to as many as 1,000 reps a day.

Would that come at the end of the workout?

Yeah. Sometimes I would come back to the gym later in the day and just do abs because it would take a while.

What were your preferred ab exercises?

Not a lot of guys devote that much time to their ab training these days.

Worked for me. I just went by the example of those who had been training at Gold’s Gym [in Venice] when I got there. You know, in the late ’60s Zabo Koszewski was there and he had the best abs and I figured, Well, I’ll try it. He would do 500 Roman-chair situps in the morning and 500 leg raises in the afternoon and so that’s what I did. I figured if you had great abs and you had everything else, you’d look even better, and it worked.

Not only did it give me great abs, but it gave me great upper-quad separation. 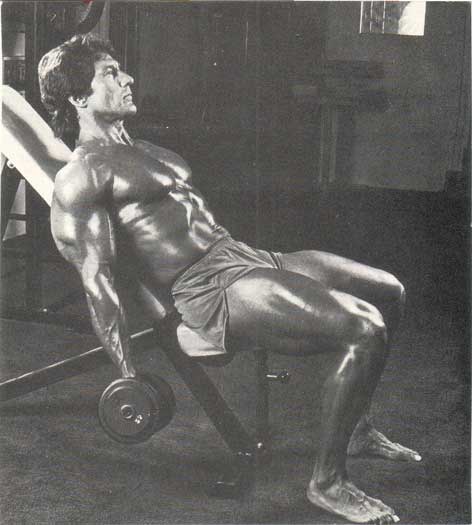 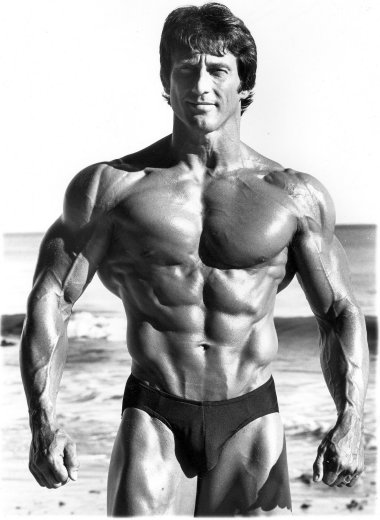 That’s true, you did have that great detail in your upper thighs. What about cardio?

I didn’t do much in the way of cardio maybe two hours a week.

My diet was always very good, but volume training in itself really conditions you. if you go heavy, you’ll grow too, but boy, volume training really works you down to your core. To this day, I still practice volume, except now I will train three days a week or so.

I know that early on you dabbled in some powerlifting.

Just initially. Where I grew up in Pennsylvania it was really the center of weightlifting in the United States. But I wasn’t really into the Olympic lifts and, actually, the area where I was in northeastern Pennsylvania there wasn’t even powerlifting yet. They called it “odd lifting” and they sort of organized their own competitions. They picked the lifts that the greatest number of guys were good at. But through my whole career in bodybuilding, until I moved to California, nobody was that good at squats, except for me. So the lifts were bench press, curls and deadlifts, and I never did deadlifts. I mean, I did them to get into the contests. At a bodyweight of 175, I ended up doing a 425 deadlift, 285 bench press and 155 curl. But if they’d had squats in there, I would have been squatting with over 400 because I was always a good squatter.

Was that early heavy lifting important for giving you a foundation on which you later built your physique?

Well, it gave me mass, but I’ll tell you one thing if I had to do it all over again, I don’t think I would have done it. It just gets you injured. You’re just focusing on the weight and often ignoring the subtle signs your body is giving you and once you’ve hurt yourself, that’s it. It never really goes away. Now I’m paying the price for all of that heavy lifting.

The old injuries are catching up to you?

Absolutely. I think as you get older, it’s inevitable that you feel the effects of the injuries you incurred years earlier. I mean, joints can only take so much. I think shoulders are very susceptible to wearing out all that upper-body work, especially if you’re training upper body heavy, training upper body two days in a row. My shoulders have been traumatized and now I have to back off shoulder work. I did so much shoulder work and they got so developed that now almost anything I do goes to my shoulders. So I’m fortunate in that I don’t have to train shoulders.

In those days, I did what was necessary for me to win. This included training with heavy weights: a precursor for injury. So if I could do it over again I’d train with lighter weights, higher reps, no sets below 10 reps, with negatives slower than positives, and avoid injury. If I had done that, my physique wouldn’t have been quite as bulky, but with more definition and with less pain.

How does your training today compare with the training you were doing 30 years ago? Obviously you aren’t training for competition any longer, but is it fairly similar to what you were doing then?

On the whole, it is, with lighter weights and less volume, of course. I have to say that I rely heavily on muscle memory these days, and it is a pretty amazing thing. I don’t have to train that much anymore to stay in decent shape, which is good because my joints couldn’t handle a lot of this work now. But there comes a point in your 60s when you hit a kind of age barrier, and the gains come slower and the accumulated stress you put on your body all those years adds up. It’s a bit of a balancing act–knowing how much to train to elicit results without aggravating old injuries.

I now subscribe to the parsimony principle. I no longer want to carry that much mass on me. I want to be lean and lighter. It’s easier to carry around less weight and I’m more comfortable. It also doesn’t require as much training, which equals less stress on the joints.

I have the same structure, similar metabolism, amount of blood, organ reserve that I did all those years ago, except now I’m carrying around 15 pounds less body weight, so it’s much, much easier on my system. I don’t eat nearly as much as I used to, but what I do eat is very nutritionally dense. I don’t even need to sleep as much, although I do make sure to get plenty of rest. But you know, these days I get great satisfaction from training other people rather than focusing on myself. I like to help steer them toward their goals. For me, it’s a matter of living as long a quality life as I can. It’s more a matter of health and longevity for me than trying to impress people.

Yeah, that’s what it is. It’s becoming a mature person. I’m comfortable with the idea of passing the torch helping others to aim for the same kinds of goals I once aimed for. In the end, I think it’s a very natural progression and a good thing.

This article was published in Flex Magazine, August 2008 issue