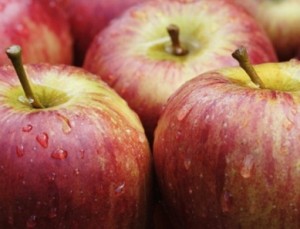 If you’ve paid attention to our preworkout nutrition advice over the years, you know we recommend having 20-40 grams of low-glycemic or slow-digesting carbs along with your protein shake in the 30-minute window before training.

An apple is a good carb to have at this time because its high fructose content makes it low-glycemic since the liver must first convert it into glucose. What makes it even more slow-digesting is its high fiber content.

But carbs and fiber aren’t the only reasons you should reach for an apple before workouts, according to research from the Nippon Sport Science University (Tokyo) and the University of Arts and Sciences (Saitama, Japan). Both research teams discovered that the polyphenols in apples (similar to those in tea) provide added benefits such as increasing strength and endurance, and decreasing bodyfat.

The Nippon Sport Science University team gave male rats apple polyphenols or a placebo for three weeks, and measured their bodyfat, force (strength) and muscle fatigue before and after the three-week trial. As reported in a 2007 issue of Medicine & Science in Sports & Exercise, the rats given the apple polyphenols had about 30% less bodyfat compared to the placebo group because the polyphenols increased the activity of genes that spur fat-burning.

The researchers also discovered that the rats in the apple polyphenols group gained nearly twice as much strength and avoided muscle fatigue much longer than the rats given the placebo. They speculated that the increased use of fat for energy may have allowed the rats to resist fatigue longer.

In the University of Arts and Sciences study, the researchers gave more than 70 obese male and female subjects 600 mg of apple polyphenols or a placebo per day for 12 weeks. They measured the subjects’ LDL (bad) cholesterol, total cholesterol, bodyweight and abdominal fat at the beginning and end of the study and found that those supplementing with apple polyphenols lost significantly more abdominal fat and bodyweight, and had lower total cholesterol and LDL cholesterol levels compared to the subjects taking the placebo.

To increase your own muscular strength and endurance, as well as get leaner and lower your cholesterol levels, take 500 mg of apple polyphenols in capsule or pill form before breakfast and dinner.

In addition, eating a large apple (with the skin on) with your preworkout protein shake will provide about 200 mg of polyphenols, 30 grams of low-glycemic carbs, more than 5 grams of fiber and about 110 calories.