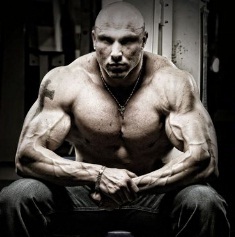 Simplyshredded.com has frequently described how you can use carb rotation to assist you in leaning out. By reducing carbs on some days and eating more on others, your body is better able to maintain muscle mass while shedding bodyfat.

This is such a potent diet strategy that you can also use it during bulking phases to help you build muscle without adding as much bodyfat as you otherwise might. In other words, if you want to get bigger without getting fat, you should give this 12-day carbohydrate-cycling strategy a whirl.

This strategy is the cornerstone of a mass-building plan that we’ve found to be successful for virtually everyone who’s used it. On this plan, follow four days of moderate carbohydrate intake by eight days of greater carb intake more akin to a traditional high-carb diet, which is so effective in adding mass.

This seven-point plan allows the individual who struggles with bodyfat to add mass while keeping bodyfat levels in check. 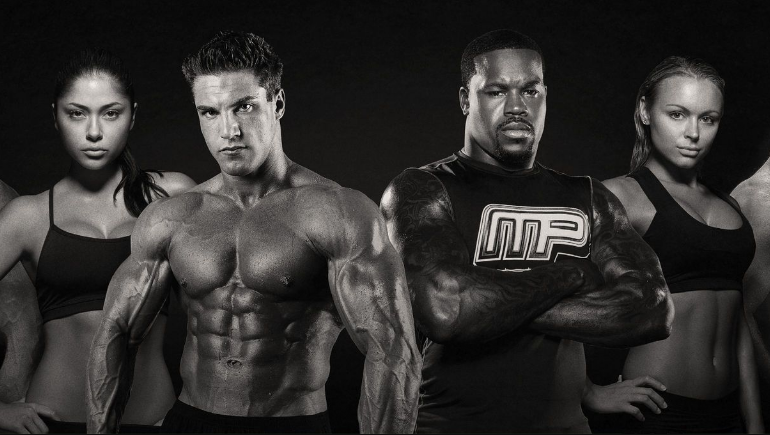 Protein gives the body the building blocks of muscle growth. You need to consume at least a gram of complete protein per pound of bodyweight daily. Thus, a 200-pound bodybuilder should eat at least 200 grams (g) of protein per day and, equally important, spread it over five to seven meals. The main twist: Count only the protein found in meat, eggs, dairy and milk- or egg-based protein powders.

Although vegetables and grains have some protein, don’t include them in your total.

Carbs help set up the body hormonally for growth. They induce the release of insulin, which gets protein and carbs into muscles for growth and repair. The downside is that when you take in too many carbs, they can be readily converted to bodyfat and stored. Thus, a moderate intake of 1.5 to 1.75 g per pound of bodyweight each day for, four straight days is the baseline level to keep your insulin levels up, helping you to grow. A 200-pounder would consume 300-350 g a day.

Moving to a high carb intake after four days of modest consumption pushes up insulin levels even more, which helps drive the body into a stronger anabolic state. Take in 2.5 to 3.5 g of carbs per pound of bodyweight. A 200-pounder would eat 500 to 700 g of carbs daily.

These eight days of high carbs will saturate muscle glycogen stores, a strong marker for growth.

Repeating the cycle of four days of moderate carb intake followed by eight days of high carbs will help keep your bodyfat from rising too much while you continue to pack on mass. Thus, the four modified carb days will allow you to pull back on glycogen stores and keep you lean while bulking.

We’ve established these cycle lengths as a baseline because they seem to work very well for most people. You can make adjustments to the lengths of these cycles based on your own body’s response. If you’re starting to look softer and think that you’re storing more fat than you should, shorten your high-carb cycle to six days and reduce your carb consumption during your moderate phase to the low end of your target range (1.5 g per pound of bodyweight).

Keep in mind that individual variance is always a major factor in a bodybuilding diet, and you need to monitor your body to make sure you’re responding in a way that will allow you to reach your goals.

Bodybuilders understand the concept of thermogenesis where food, especially carbs, can be burned off (as a byproduct of metabolism) rather than deposited as bodyfat. Thermogenesis is one reason ephedra products can help keep you lean. They can increase your metabolic rate and help promote the burning of carbs as well as bodyfat. Moving from a lower carb intake to a higher carb intake increases the thermic effect.

Thus, a 200-pound bodybuilder will burn off some of those carbs during the eight consecutive days when carbs are higher, helping him to stay lean while continuing to build muscle mass.

Moving from a lower to a higher carb intake may change hormone levels and might help you look like a bigger bodybuilder, not a fatter one.

Carbohydrate cycling is a simple but potent formula for muscular growth. Often, when bodybuilders enter bulking phases, they overeat to make certain they’re providing their bodies with all the protein and nutrients they need for maximal growth. The result is more stored bodyfat than desired.

By using carbohydrate cycling, you help control the hormones of your body, giving yourself an anabolically desirable environment for maximal muscle growth without the unwanted addition of extra bodyfat.

Follow the numbers for your bodyweight to help you pack on quality poundage during your bulking phase. 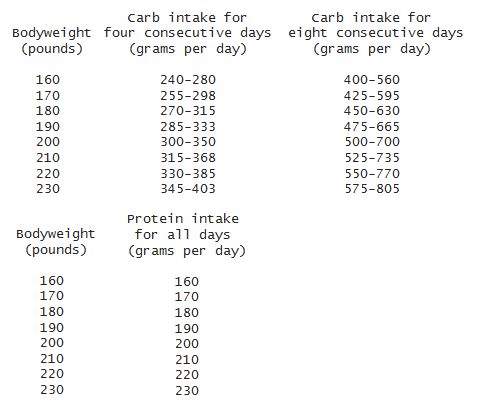