When I was a teenager just getting started in bodybuilding, I used to marvel at the biceps of Larry Scott. They were the best I’d ever seen, and to me they still rank as the best ever. Scott’s biceps heads were incredibly long, reaching past his elbows, and they were very thick and full, too. In studying my own biceps early on, I realized that Scott would be a good role model for me because I also had long muscle bellies. As much as I was amazed by the high peaks of Freddy Ortiz (Mr. America short-class champion in 1963 and ’64), I knew that there was no way I could ever attain arms that looked like his because our basic structures were too different. In time, my upper arms stretched the tape at 22 3/4″ cold no pump at all. This was when I was at my biggest, 325 pounds, for the 1994 Masters Olympia, in which I finished second.

For that contest, I used the same biceps routine that I had applied in preparation for the 1975 Mr. Olympia [in which he placed third in the heavyweight division]. In fact, I’ve been so pleased with the results that I still use pretty much the same workout to this day. 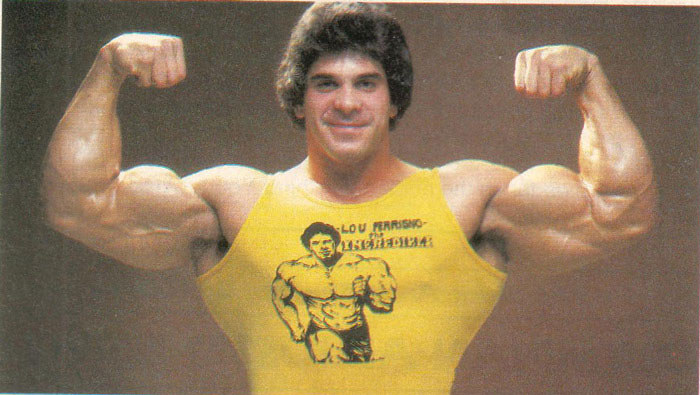 There’s a general misconception about biceps training that more is better. For more than 30 years, I’ve been doing three or four exercises, two to four sets apiece and with a strict rep range of eight to 10. That’s usually a total of about 14 sets, give or take, which takes me less than a half-hour to perform. I pyramid up in weight for each exercise, although I don’t necessarily lower my reps to accommodate the increase. No matter how hard it may be to bump up your poundage from set to set, it is important that you do so.

I firmly believe that you get the most growth activation and strength improvement out of the last set or two of an exercise, when your muscles are pushed to their limits.

Let’s say I’m doing barbell curls, which is usually my first biceps exercise. I’ll start with a light weight and do 10 quick reps (still using good form) just to get the biceps warmed up. My next set will again be 10 reps, with a weight that gets difficult to lift on the seventh or eighth rep. For my third set, I’ll add another 20 pounds and shoot for eight reps. Then, for my final set, I’ll add another 20 pounds and go for eight again. I struggle to get eight on the third set, so when the fourth set comes around, it’s a real test of will, after having increased the weight, to try to equal the same number of reps. When I move on to incline dumbbell curls, I stick with eight reps for all four sets, but I keep increasing the weight for each set, from 50s to 60s to 70s to 80s.

A lot of people assume that pyramiding means increasing weight while dropping reps. If you set a goal of keeping the reps the same set after set while increasing weight, you bring a whole new level of intensity and mind over matter to the equation. 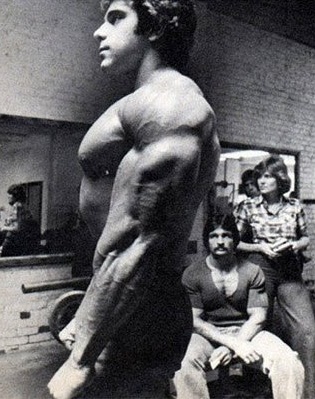 Incline dumbbell curls are my favorite biceps exercise. I like the full range of motion and the stress in the biceps from the bottom of the movement all the way to the top. I get a really good stretch at the bottom, although I never let my elbows lock out. I believe you can do damage to your elbow joint if you let it lock each time you lower the weight. I also like to lift with my arms in unison, as opposed to alternating them, as there’s too much opportunity to cheat when doing them one arm at a time.

In the movie Pumping Iron, I do incline dumbbell curls with a pair of 100s. I don’t go quite that heavy anymore, but I can still get 80s up for reps. This exercise is a great overall biceps builder.

Barbell curls and incline dumbbell curls are basic mass movements. I try to go as heavy as I can for these, while maintaining strict form. My third exercise, however, will be an isolation movement, such as standard preacher curls or spider curls, which are done hanging over the end of a high bench. I lighten the weight and return to an eight- to 10-rep range, concentrating on slow, steady motion and really contracting my biceps at the very top of the movement.

For my last exercise, I like either 21s or concentration curls, both of which give me a great burn to end my workout. If you’ve never heard of 21s, they’re an old standby. Not many people do them anymore, but I’ve always liked them. To perform 21s, choose a barbell that’s about half the heaviest weight you normally use for your final set of regular barbell curls. For the first seven reps, curl the weight as you would a barbell curl, but instead of going all the way up, stop when your forearms are parallel with the floor (i.e., the bottom half of the full range of motion). When you’ve finished the seventh rep, perform another seven reps beginning with your forearms parallel to the floor and curling to the apex (i.e., the top half of the full range of motion). Finally, after you’ve completed those seven reps, do seven more, this time going all the way down and all the way up. It’s a killer. By the time you’ve finished a set, your arms feel like Jell-O. If I choose one-arm dumbbell concentration curls instead, I like to do them leaning on a bench or holding on to a dumbbell rack.

I’ll only do two sets of the final exercise, which makes a total of 14 sets. The biceps aren’t a big muscle group they don’t require the same number of sets as for chest, back or thighs. For me, 14 sets or so does the trick for biceps. 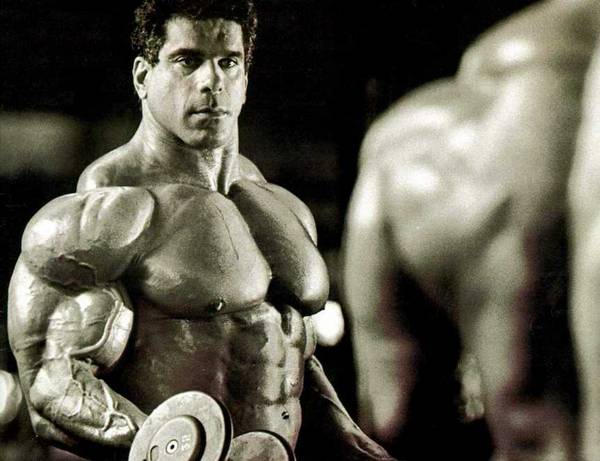 Although I have a few favorites I stick with time after time, I do inject variety from workout to workout by changing up the order. The sample workout I just outlined is the default order for my biceps training. If I were to do the same routine every workout, my biceps would eventually adapt to the exact kind of stresses I’m putting on them and not respond. To combat that, I’ll reverse the order, swap out different exercises for my usual ones or just mix up the entire workout on occasion. Joe Weider calls it the Muscle Confusion Training Principle, and I’m a strong believer in it.

All About The Form

I can’t emphasize enough how important it is to use good form. It’s just not worth the risk of injury to compromise form to try moving a weight that’s too heavy. For example, when doing barbell curls, you want to take a shoulder-width grip, keep your chest high, your shoulders back and, as with seated inclines, never completely straighten your elbows at the bottom of the movement. You also want to keep the motion steady throughout. A mental trick I’ve used is thinking of the motion as if I were playing a violin, keeping the same pace both in the positive and negative portions of each rep.

You should also make sure that you are squeezing the biceps throughout; there should never be a point during a set when your muscles relax.

Training Back With Biceps?

Some people pair biceps with back because the two groups work synergistically. Others put tris and bis together in an arm day. I prefer the latter, because I find that back training incorporates the biceps so much that they’re burned out by the time I get to them. When I train arms as a whole, however, I get a great pump and the biceps workout actually prepares my triceps for their training by pushing blood into the entire upper arm.

Train your biceps twice a week following my suggested routine, keep the intensity high and the form solid, and I’m confident you’ll maximize your arms’ growth potential just as I have my own.