I first became interested in bodybuilding from reading the superhero comic books when I was a kid. Bodybuilding wasn’t a very popular sport back then and, in fact,not too many people actually lifted weights so the only guys I saw who had muscularphysiques were the superheros in the comic books.One day, I went to see the Batmobile from the TV show “Batman” at a car show in Chicago. They also had the car from “The Green Hornet” TV show there also. This was right around the time of Bruce Lee’s death (Bruce played Kato on “The Green Hornet” TV show). They had this big black and white picture of Bruce Lee from “Enter the Dragon” and he was very muscular and ripped.

I never saw a real person who looked like that so I immediately wanted to find out everything about Bruce Lee and how he got to look like that.

When I started reading books about him, I found out Bruce was a fitness fanatic and he also lifted weights for strength and power.I told my parents that I wanted a weight lifting set for Christmas that year and started lifting weights at home. However, I didn’t know what exercises to do to build my body so I went out and started buying the bodybuilding magazines. When I saw the bodybuilders in the magazines, I knew that this is what I really wanted to do. I started lifting weights at 14 years old, right before I started high school. 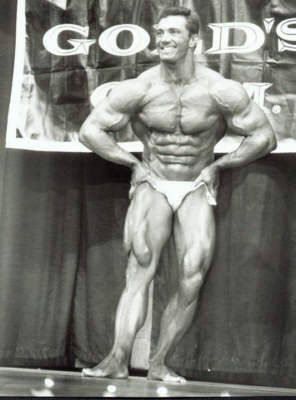 My initial motivation was to build my physique so I could compete and win the Mr. Universe title one day. That was my goal from the very beginning, I wanted to win Mr. Universe. The year I started bodybuilding, Kal Szkalak won the heavyweight Mr. Universe title in Nimes, France in 1977. Kal looked so awesome on that winner’s podium that I wanted to do the same thing. Kal was 10 years older than me so that was my goal, to win the Mr. Universe title by the time I was 24 years old.When I started competing in bodybuilding contests at 16 years old, this was a tremendous motivation. When you know that you are going to be onstage in skimpy posing trunks, showing off your physique, you really stay motivated at every workout. I competed until I was 41 years old so this was my primary motivation.

My training philosophy is to use the basic exercises for 6-10 repetitions. I like using free weights (barbells and dumbbells) over machines and cables because I think it gives you a better workout and it builds more muscle mass and strength.Nowadays, I train each muscle group only once a week and I train about four days a week. I don’t compete anymore but I still train to look good. I can’t train as heavy as I used to because my joints and lower back cannot take the punishment that they could when I was younger but I still try to get in a good workout. It’s mostly about maintaining now compared to years ago when I was always trying to get bigger.

Just normal cardio. I am always conscious about losing muscle mass when I am doing cardio and dieting so I keep it pretty low intensity. I tried doing HIIT cardio before and it is very hard but it seemed to pump up my legs more than burn fat but I don’t think I did it long enough or gave it a fair trial in order to accurately judge how effective it is.

I eat pretty lean most of the time now. When I was competing, I would always have an off-season where I would eat lots of calories and carbs and train very heavy to bulk up and then start my diet anywhere from 12-16 weeks out to get cut up for the contests. Nowadays, I eat lean almost all the time, keeping my protein high (300 grams) and my carbs moderate (120-200 grams) and moderate amounts of good fats (60-70 grams) a day. I probably eat 7 times a day including three Optimum Nutrition protein drinks.

My favorite meal is probably breakfast. I always have egg whites and oatmeal with blueberries on top and I love starting the day with this meal. I’ve been eating like this forever.

Probably chocolate chip cookies. I also enjoy going to a nice restaurant and having a good meal. I don’t eat a lot of junk food but if I had to pick one cheat food, it would definitely be the cookies.

What supplements do you use that give you great results?

I’m pretty basic when it comes to supplements. I use protein drinks 3 times a day, usually 100% Whey Gold from Optimum Nutrition. I also love their new Hydro Whey protein before my workouts and my cardio sessions. I would never dream of ending a workout without having my 2:1:1 Recovery for recuperation. I also take Threshold before my workouts and I like drinking Vassive EA8 and Vassive NO when I am in the middle of an intense workout. I have really been getting a lot out of taking HMB for recuperation. 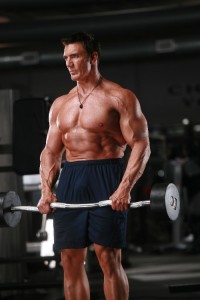 Arnold was always my favorite bodybuilder and my biggest idol when was younger and competing. I was also initially inspired by the physique of Kal Szkalak, 1977 Mr. Universe. I always looked for bodybuilders who had the same type of structure and shape as my physique for inspiration so two other pro bodybuilders I looked up to and admired were Phil Williams, 1985 NPC Nationals champ and Mike Quinn, 1987 NPC USA champ.

There are three types of people in the world – those who make things happen, those who watch what happens and those who wonder what happened.” – John Hansen