In Part 1, we discussed the fiber type composition and biomechanics of the chest, triceps and shoulders. In this installment, we’ll cover the other major muscle groups. 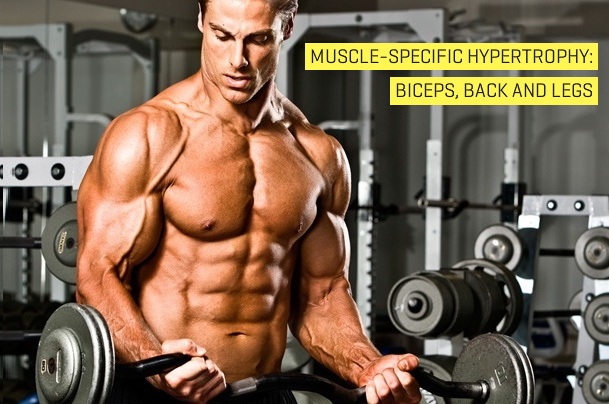 The biceps, consisting of a long (outer) and short (inner) head, may seem like a simple muscle with straightforward biomechanics, but it’s in fact a tri-articulate muscle that crosses the elbow, forearm, and shoulder. The short head of the biceps is a shoulder flexor, albeit a weak one, which means it enters active insufficiency when performing elbow flexion and shoulder flexion simultaneously. In other words, it can’t perform these two tasks at the same time, so any biceps machine or exercises that has your elbows in front of your shoulders mainly trains the long head. The same goes, to a lesser degree, for exercises involving shoulder abduction.

So the next time you want to do standing cable curls in front of the mirror in a front double biceps pose, remember that you’re likely training your ego more than your biceps. 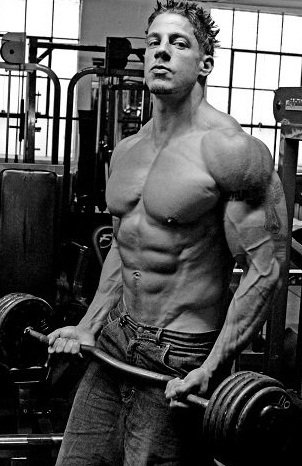 If you’re trying to increase your biceps peak, be realistic. You can only modestly increase the peak of your biceps by growing the long head. The shape of your biceps is in large part genetically determined. Some people have long biceps and can only squeeze in a single finger between their biceps and forearm, whereas others have short biceps with a large peak. So worry about overall mass first before fussing around with building peaks like Albert Beckles. To emphasize the brachialis, the small muscle under the biceps and in between the biceps and the triceps on the outside of your arm, over the biceps, perform slow contractions with the biceps in a disadvantageous position (shoulders flexed). The brachialis is more slow-twitch dominant than the biceps, which responds best to fast contractions.

So why are some exercises easier with the hands in neutral position?

It’s because the brachioradialis, another elbow flexor and one of the larger forearm muscles, is most effective in that position. Regarding the number of reps to use, while the biceps is fast twitch dominant, it’s only dominant by a few percent, so medium reps work best.

The brachioradialis is more fast twitch with ~60% type II fibers, so go heavy on those hammer curls.

The forearms are composed of so many small muscles with varying fiber type compositions and different biomechanics that the full story would go well beyond the scope of this article. Suffice to say, elbow extension and flexion cover the largest of the forearm muscles, so do those movements before trying stuff like ulnar deviations and finger exercises. Gripping exercises, such as holding onto something or actively crushing something, also train many of the forearm muscles, which is why many people get by fine without doing any isolation work for their forearms.

In accordance with their heavy usage, most forearm muscles are slow twitch dominant, so use relatively high reps. Also, be careful of doing only wrist flexion and no extension in your programs.

The latissimus dorsi and its little helper on top, the teres major, function primarily as shoulder adductors (pulling the elbows into the sides) and shoulder extensors (the movement opposite of a front raise). 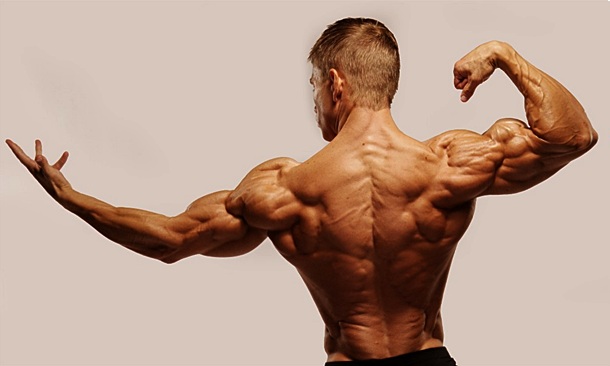 Watch the movement of your shoulder. If you use a rope, rings, or any handle that can rotate, you should naturally rotate the shoulder to the optimal position during most pulling exercises. If you don’t, you need to use a handle that puts your shoulders in the optimal position yourself. For example, during straight-arm pulldowns, you should use a slightly V-shaped handle instead of a straight bar to maximally recruit your lats.

On the topic of the lats’ muscle fiber type composition, the lats on average have an equal amount of slow and fast twitch fibers, so they respond best to medium reps.

The trapezius is an exemplary muscle. 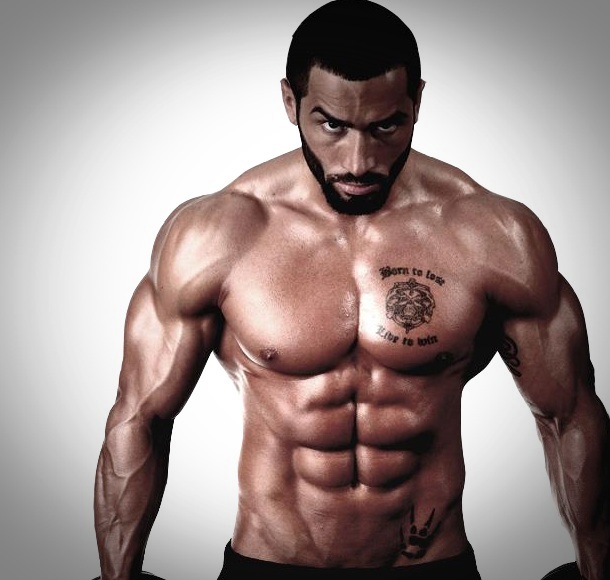 Even among the people that train their back as hard as their mirror muscles, the traps tend to get left behind. Most people do isolation work for their mirror muscles, but when was the last time you did isolation work for your middle or lower traps? Although the lower and upper fibers of the trapezius have opposing functions (depress and elevate the scapulae, respectively), training the traps is pretty basic – depress, retract and elevate your scapulae against resistance in equal amounts. (Key phrase being, in equal amounts!)

Also, you may think you’re achieving structural balance with your programs because you’re pushing and pulling in a 1:1 ratio, but you should really do more pulling volume than pushing.

The chest is fast twitch dominant, but the traps are a postural muscle and are correspondingly slow twitch dominant, so you should do more volume for your traps than for your chest. It’s worth noting that the rhomboids, which also retract the scapulae, are composed of approximately 55% fast twitch fibers, but since these muscles are invisible from the outside, this shouldn’t concern bodybuilders.

Also, for those training their necks, the sternocleidomastoid, a neck flexor and extensor, is about 65% fast twitch.

The Glutes, Hamstrings and Lower Back

These muscles comprise the mid-lower posterior chain and have massive force output potential. They often work together during hip extension, where the erector spinae stabilizes the spine, and the glutes and hams move the hips. Besides extending the spine, the erector spinae also laterally flex and rotate the spine. The gluteus maximus and hams are mainly responsible for extending the hips, but the hamstrings also flex the knee. The short head of the biceps femoris even performs knee flexion exclusively. This dual function of the hams has very important implications for the training of your glutes, hams, and calves. If the biarticulate hamstrings try to stretch at the hip and the knee simultaneously, they enter passive insufficiency.

If they try to flex at the hip and the knee simultaneously, they enter active insufficiency. Basically, the hams can’t perform their functions at both joints at the same time.

This means that during hip extension exercises, such as deadlifts, the more you flex your knees the less the hams can come into play, and the more you emphasize the glutes. If you only do bent-knee exercises for your legs (and no leg curls), you’re not completely training your hamstrings. Then again, many lifters have weak, underactive glutes and strong, overactive hams, so you may actually want to emphasize glute training. Since the glutes and hams both flex the hip, bodybuilders may be inclined to exercise both bodyparts at the same time. This is sub-optimal. The glutes are slow twitch dominant by a few percent, but the hamstrings are composed of a whopping 70% fast twitch fibers.

The erector spinae are slow twitch dominant with 56% type I fibers. This means you should use relatively low reps for the hamstrings, but medium to high reps for the lower back and the glutes.

The calves consist of the soleus and the gastrocs.

The long, deeper calf muscle, the soleus, keeps you upright all day and is correspondingly close to 90% slow twitch, so don’t bother with low reps! The soleus is also the part of the calves that is so notoriously difficult to develop. The gastrocnemius responds much better to training and is often called the fast twitch dominant part of the calves, but that’s only compared to the super slow soleus. The lateral head is indeed fast-twitch dominant, but only by a few percent, and the medial head is actually slow-twitch dominant by a few percent, so use medium volume for the gastrocs. You can also slightly emphasize the medial head by pointing your toes out and the lateral head by pointing the toes in. Both the soleus and the gastrocs perform plantar flexion, the movement occurring during calf raises, but the biarticulate gastrocs also flex the knee, and they can’t flex at both joints at the same time due to active insufficiency.

The front of the thighs consist mostly of the quadriceps. The quads in turn are composed of three main heads – the vastus lateralis (“quad sweep”), the rectus femoris and the vastus medialis oblique (aka VMO or “teardrop” for you muscleheads).

All heads extend the knee, which is the movement occurring during leg extensions, but the rectus femoris also flexes the hips, so it enters active insufficiency when trying to do both at the same time. To demonstrate this, pull your knee up as high as you can. Now try to extend the knee. Hard, huh? That’s active insufficiency of the rectus femoris. The VMO and the vastus lateralis also pull the patella in opposite directions during knee extension, so it’s important to maintain structural balance between these muscles.

There’s controversy regarding if and how preferential recruitment of the VMO over the VL is possible, but healthy trainees should be fine provided they use bilateral and unilateral closed chain exercises with a full range of motion.

Regarding the quads’ fiber type composition, it varies significantly per head. The VMO is slightly slow-twitch dominant, the vastus lateralis is approximately 57% fast twitch, and the rectus femoris, the center of the thighs both literally and metaphorically, is a 65% fast-twitch powerhouse. Now you know why Olympic weightlifters tend to have large quads. For maximum muscle mass, I recommend mainly low reps but also high variety for the quads. There’s a bunch of other small thigh muscles, including the adductors.

I’m not going to cover them all, so put simply, the adductors are about 60% slow twitch and the other hip flexors have a 50-50 fast-slow muscle fiber type composition.

The rectus abdominis, aka the six-pack, flexes the spine, as during crunches. 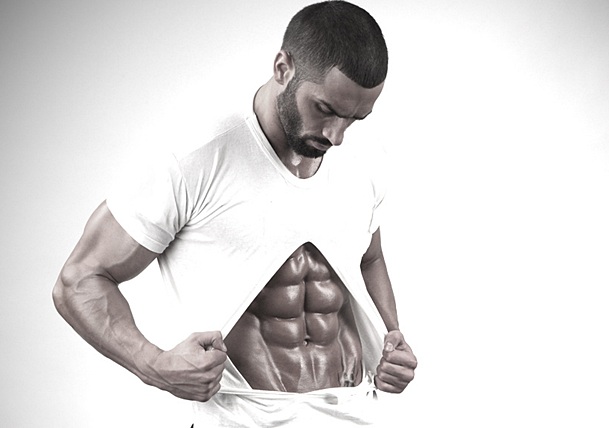 The obliques assist the abs in this and laterally flex and rotate the spine.

Moreover, along with the transverse abdominis, they create intra-abdominal pressure. As such, the obliques and transverse abdominis have to work hard to stabilize the ‘core’ during heavy compound exercises, such as squats and deadlifts. The rectus abdominis, however, may remain undertrained without direct work, depending on your exercise selection. Another consideration is that, anecdotally, the anterior core seems to have limited hypertrophic potential, even though its muscles are 55% fast twitch dominant. Then there’s the debate on whether spinal flexion is healthy and if extra mass is even aesthetically desirable in the midsection. With all this in mind, I think beginners should do low rep anti-extension exercises, like planks, rollouts and reverse crunches, even if only for the sake of learning to properly stabilize the trunk with the core.

After having developed proper neural control, heavy compound exercises, such as vertical pressing and pulling and anterior load carriage, are generally sufficient training for bodybuilders, depending on the exact exercise selection and individual preferences.

And with that, dear friends, you’re all set. You’re now armed with virtually all the biomechanics and fiber type composition knowledge you’ll ever need to optimally recruit your muscles, manipulate exercises to emphasize certain muscles, and modify your training variables for each individual muscle.

Now go tweak your training program and get growing!