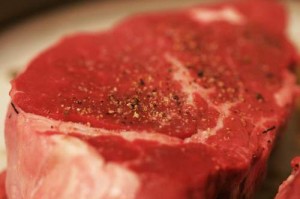 When looking to increase your rate of fat loss, one important factor that most dieters concern themselves with is trying to reduce feelings of hunger.  A fat loss diet is going to be significantly more difficult to follow when you’re feeling incredibly hungry all the time, making it vital that you do whatever you can to prevent these feelings of hunger in the first place.

Researchers out of the Department of Internal Medicine in Karolinska University Hospital wanted to compare the effects of protein from fish with protein from beef in terms of satiety in normal weight men. They had 23 normal males within the age range of 20-32 years of age take part in the study.

On the morning of test days the subjects received a normal standardized breakfast, and four hours after that breakfast, they were served an iso-energetic protein meal that consisted of either fish protein or beef protein.

Four hours after that, an ad libitum evening meal was served and the intake of food was measured.  The appetite the subjects demonstrated was rated by visual analogue scales before and after the meals as well as during the periods between the meals.  After the evening meal the subjects also kept a food journal of any foods or beverages they consumed.

The results of the study indicated that the ratings of hunger were lower after the fish meals, as well as subjects felt a higher satiety and a lower prospective consume, but the difference did not differ enough to be significantly different according to scientific standards. In addition to this, the subjects did consume fewer calories during the evening meal after eating the fish-containing lunch without reporting feeling less satisfied, so that is an important factor to take into consideration.

So, while both types of protein will help you meet your requirements for the day, there is evidence to suggest that consuming a diet higher in fish protein may make it easier to consume an all around lower calorie diet, thus enabling you to have better success while on your fat loss plan.