She’s 5’2″, weighs 114 pounds and trains as hard as an NFL linebacker, only she’s literally half the size. Of course, if you had as many career aspirations that relied on you being in shape, you’d train hard, too. In addition to being an IFBB figure pro, 26-year-old Pauline Nordin is a journalist, trainer, diet coach and TV personality.” My worst nightmare is to wake up when I’m old and look back at my life just to see it was a waste of time,” she says. “So I try to stay out of the comfort zone and work on my personal to-do list.” 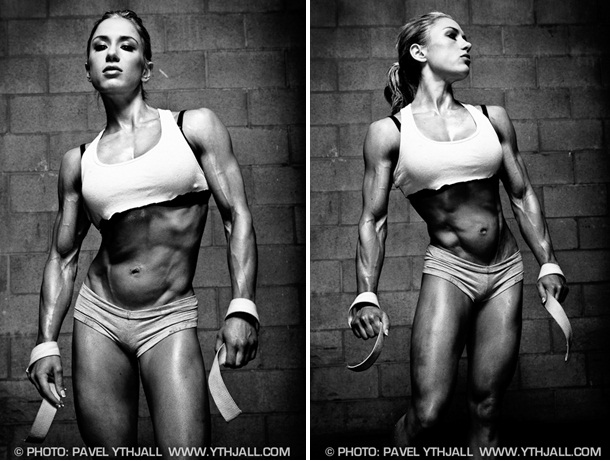 At the center of this List is her fitness regimen. Like Nov. 5, 1955, for Doc Brown in Back to the Future, Feb. 26, 1999, was a red-letter day for Pauline that was the day she picked up a copy of Muscle & Fitness for the first time. She was 16 years old, living in Sweden, and she was intrigued by the healthy couple on the cover. “I had eating disorders from ages 12-17. One day I just didn’t know what to do anymore, but I knew I had to change,” she says. “Luckily for me, I ended up seeing M&F on the newsstand. At first, I freaked out when I saw the fitness model. She looked crazy! But then I changed my opinion and decided to become a fitness star. From that day forward I put my mind to doing that.”

But to become that, a fitness model, Pauline needed to commit herself to training regardless of how she felt. In her words, she would have to become some sort of superwoman. “I just consider myself a machine,” she says. 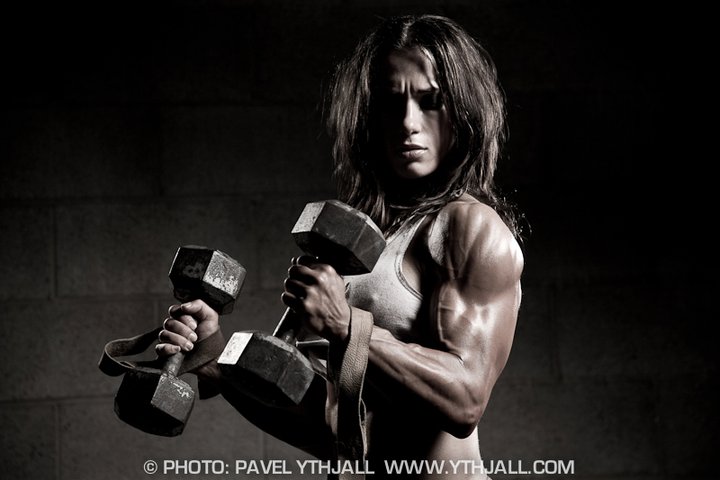 “I don’t run on emotions when it comes to training and dieting. It doesn’t matter to me if I’m unhappy or happy, I know I can do a kick-ass workout. I’ve taught myself that no matter what happens to me, I’ll always be able to rely on my mental strength.”

This fortitude isn’t strictly relegated to training, however; she’s using that laserlike focus to become the fitness star she knew she could be. The first step on her path was to move to the U.S. with her then-boyfriend, now-husband, M&F photographer Pavel Ythjall. Once in the states, she took a multimedia approach to the fitness industry by becoming a model, starting a website that offers dieting and training advice, and even acting as a technical adviser at some M&F photo shoots.

In this feature Pauline walks us through a phenomenal shoulder workout, and once again, she uses that mind-body focus to make sure she doesn’t overload the bar with something she can’t handle. “The hardest part about training shoulders is balancing going hard to make muscle gains while preventing injuries,” she says.

Judging from the results, that balance is working well. After all, big dreams need big shoulders to lift them so in that sense Pauline is built perfectly for success. 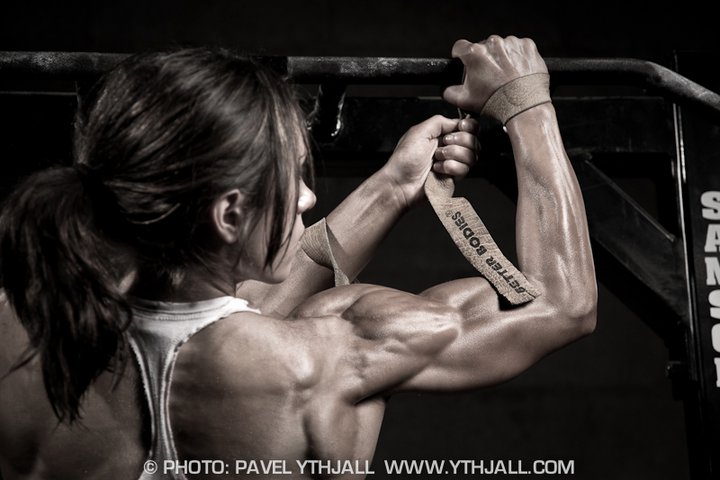 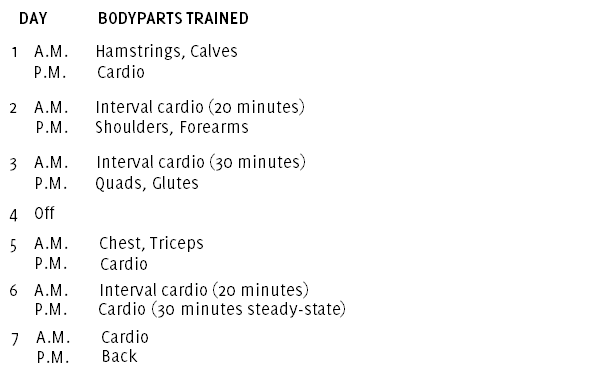 Pauline explains: “I go fast and hard until I hit my 85% estimated maximum heart rate. I stay there for hour minutes, then cool down.” Pauline generally uses the stationary bike, doing 20 minutes total of 15-second all-out springs interspersed with one minute of a slower recovery ride. 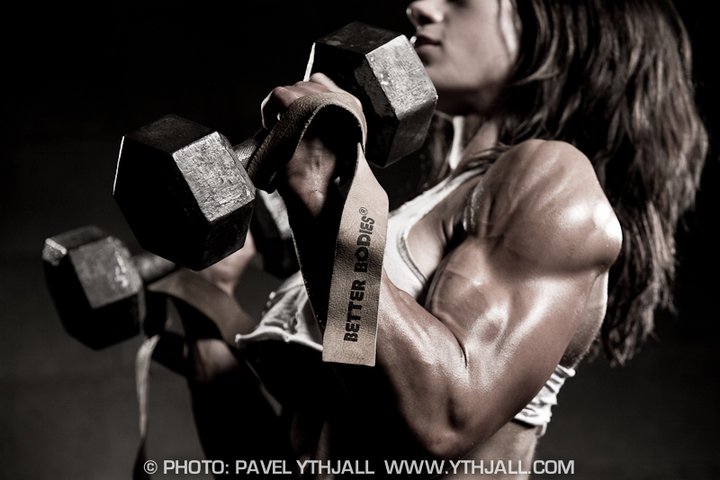 Stand erect and grasp a barbell outside shoulder width with a palms-forward grip, elbows pointing down and outward. Carefully unrack the bar and hold it at shoulder level.

In a smooth, strong motion, press the bar straight up to just short of elbow lockout. Squeeze your delts for a count, then lower the bar under control to the start and repeat for reps.

“When I can’t complete any more reps with perfect form, I continue the set with some push presses, bouncing slightly at the knees to help me get the bar up and squeeze out a few more reps.”

Stand erect and grasp a dumbbell in each hand at shoulder level with a pronated grip (palms facing forward). Keep your head straight and eyes focused ahead.

With your shoulders back and your chest out, press the weights overhead in an arc to just short of elbow lockout. Don’t let them touch at the top. Slowly lower to the start position and repeat.

“I do these the same way as the barbell press, meaning first I do regular reps and then I add some push presses. Sometimes I use one arm at a time, which gives me a slightly different feel due to the increased recruitment of my stabilizers and core.”

When you fail on your last set, reduce the weight by 20%-30% and continue repping until you reach failure again.

Stand with your feet hip to shoulder width apart, keeping your abs tight, chest up, shoulders back and head straight. Hold dumbbells at your sides using a neutral (palms-in) grip.

Without using momentum, raise the weights out to your sides in a wide are, keeping your elbows and hands moving in the same plane. Bring the dumbbells above shoulder level and pause momentarily. Slowly lower the weights along the same path and repeat for reps.

“Most people stop their laterals at parallel, but you can continue to recruit the delts as high as 130 degrees, so I raise the dumbbells higher for increased intensity. For an even greater burn, stop the weights about inches from your body on the return.”

Holding a pair of light dumbbells or weight plates at your sides, lean forward at the waist, keeping your chest up, abs tight and eyes focused forward. Allow the weights to hang straight toward the floor.

Keeping your arms straight, raise both weights in front of you until your arms are aligned with your torso. Squeeze your shoulders for a count, then lower your arms to the start and repeat.

For a different feel, try this one arm at a time using a low-pulley cable, which provides constant tension even in the start position

“This is great for the front delts, but it also recruits the lower traps. If you have trouble doing this standing, you can lean your chest against an incline bench.” 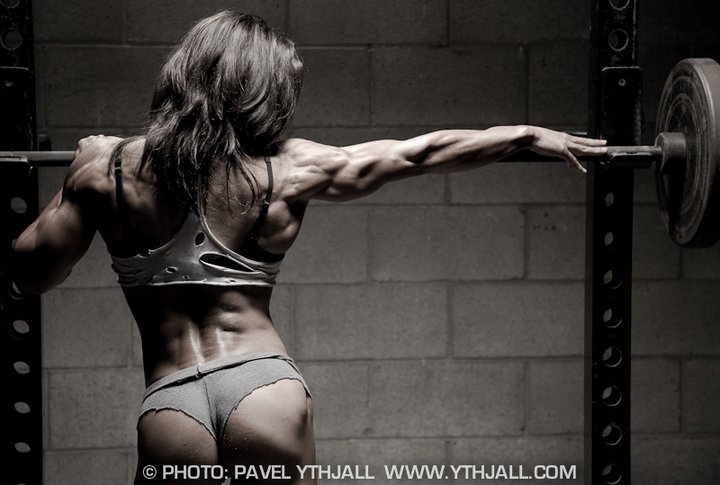