One overlooked variable for many bodybuilders, however, is rep speed. The prevailing mantra is slow and steady, contracting the working muscle as forcefully as possible at the apex of each rep. Good advice, yes … but you can do better. In fact, by using the full spectrum of rep speed, from slow to fast, in your overall program, you can maximize your growth. Isn’t that really what it’s all about?

The Fast & The Furious

The speed of each rep you perform depends on the weight being lifted, the number of reps being performed and the level of fatigue of the muscle being trained. Usually, most reps are done in a slow and controlled manner, about one to two seconds for the positive and one to two seconds for the negative. Of course, as you go heavier and the muscle fatigue intensifies, the positive portion of the rep takes longer and the negative part of the rep accelerates. Generally speaking, typical speed is about three to four seconds per rep.

Training with reps that are faster than the typical three to four seconds can be beneficial for a number of reasons. 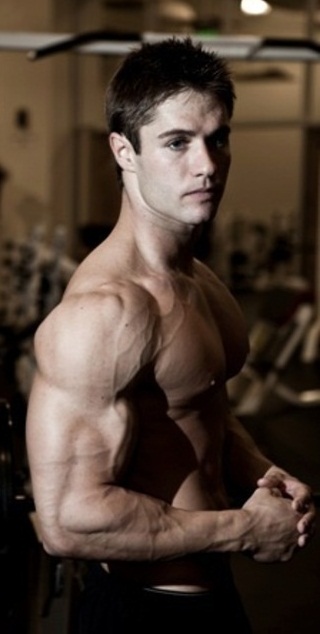 The other major type of fibers found within your muscles slow-twitch fibers produce less force and are smaller than the fast-twitch fibers, but they have greater endurance capacity.

Fast reps may focus the workload more on the intended muscles. Some research suggests that fast-rep training relies more on the major muscle groups performing a particular exercise and less on the assistance muscles that help. For example, one study found that doing biceps curls with a fast rep speed predominantly used the biceps brachii muscle, as opposed to the brachialis muscle that normally assists in a biceps curl. Slower rep training, however, placed greater stress on the brachialis muscle and a little less on the biceps brachii. Although little research has been done in this area, it’s reasonable to assume that this holds true for other exercises besides biceps curls.

Training at a fast rep speed increases the pace at which your muscles can move a given weight. The faster you can move a given weight, the more power you have. Power is important for overall muscle strength because it helps you accelerate a weight, so increasing power will successfully increase your strength. Research shows that the best way to train with high reps is to pick a weight that is about 50% of your one-rep max or a weight that you can lift for 25-30 reps. The trick is to do only three to five reps with that weight for each set. This may seem too easy to do any good, but it’s necessary to prevent fatigue. Doing too many reps when training with fast reps will only compromise your speed and can lead to injury if your form breaks. Perform each rep with explosive power, completing the positive portion as fast as possible. Return the weight to the start position in a slow and controlled manner.

Fast-rep training usually calls for multijoint exercises, such as bench presses, squats, shoulder presses, rows and dips. Do only three sets per exercise and only two to three exercises per bodypart. Train each muscle group twice per week, as in the “Fast Gains” chart we’ve provided in this article (below).

Just as fast-rep training has its advantages, training with slow reps can also offer benefits. Slow-rep training reduces momentum and forces the muscle to do more of the actual work. This can improve your overall strength and muscular size. Both slow- and fast-twitch muscle fibers are recruited, imparting gains on both. At the start of a slow-rep set, slow-twitch muscle fibers are predominantly used. As fatigue sets in, more fast-twitch fibers are called in for support.

When you reach failure, you have successfully hit all the muscle fibers you can in that exercise.

Depending on how slow your reps go and how many reps you do, some sets can last up to three minutes, extending the time the muscle is under tension. This will fatigue the muscle far beyond anything you are used to. Muscle fatigue is important for stimulating size adaptations, increasing growth hormone and IGF-I (growth factor) levels.

In addition, research has found that training with slow reps can increase strength gains better than normal rep training. 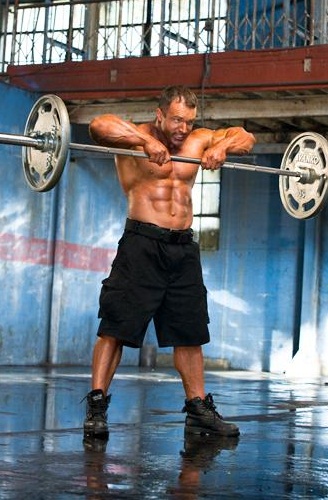 To train with slow reps, choose a weight that is 50-70% of the weight you could normally lift for each exercise for five reps. Five reps may seem easy with this weight, but trust us, you’ll be lucky to finish five before your muscles fail. Start the positive portion of the rep slowly and methodically. It should take approximately 10 seconds to complete just the positive. Hold the weight in the contracted position for about two seconds. Lowering the weight will be even more painful, as you’ll take 10 seconds to return to the start position. You should reach muscle failure by five reps. If you can do six or more reps, increase the weight for the next set. If you can’t complete at least four reps, lessen the weight.

When training with slow reps, choose more isolation exercises than multijoint, and do only one or two sets per exercise and only two or three exercises per muscle group. Due to the high intensity of this training program, work each muscle group only once per week as shown in the “Go Slow to Grow” chart.

Life In The Fast/Slow/Fast Lane

You can continue in this cycle endlessly if you’re so inclined. We suggest you try it for at least eight weeks, to see how far and fast it takes you. 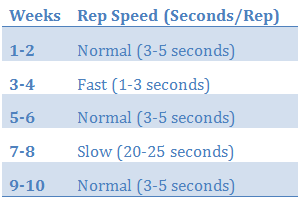 Use your current workouts and training split during the normal-speed weeks. Refer to the “fast” and “slow” charts for exercises and training splits to use during these weeks. It may be low-rep, but it’s high intensity, as you’ll find after a two-week “Fast Gains” cycle.

* = Amount of rest between sets, in minutes

* = Amount of rest between sets, in minutes