From the time that the first physique enthusiasts & bodybuilders ever started choking down extra chicken breasts, steaks, and vile concoctions to increase their protein intake for the purposes of gaining muscle; the question of just how much protein is optimal has been debated. 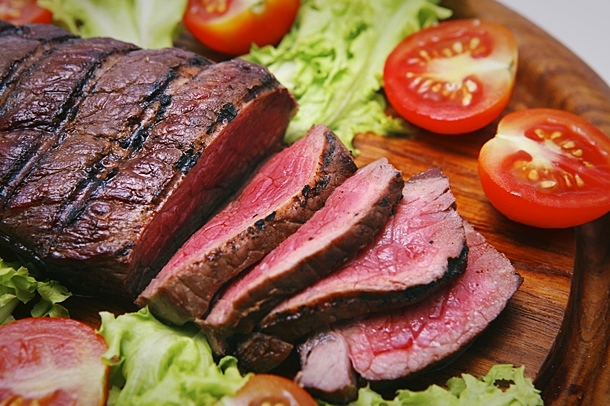 Fast forward more than half a century and people still debate the same question without much of a consensus.

Many people believe that protein is already over consumed by the typical person and bodybuilders and athletes have no need to take in extra, while there are those who will tell you that there is no upper limit to the benefits of protein. In reality the answer to this question probably lies well within the middle of these two extremes. The question of protein quantity at a meal and frequency of protein consumption has been debated almost as often as total protein consumption. Quite often we see the question, “What is the max level of protein that one can benefit from at a meal and how often should I consume it?”

Fortunately for us, this question actually has some data that we can start picking apart to get some general guidelines for protein size and frequency at meals.

Many ‘experts’ or gym know-it-alls out there who will tell you to only consume “X” amount of protein at a meal because only “X” amount of protein can be absorbed by the body at a meal (I’m sure you’ve all heard this one before). Let this nonsense stop here and now. To begin with, this entire train of thought isn’t even on the correct track. Hell it didn’t even depart from the right train station! Assuming that you have a healthy digestive system, the absorption of the amino acids from a meal containing protein is very efficient and almost never a limiting factor. Absorption only refers to nutrient uptake & absorption via the digestive track (most absorption occurring in the small intestine). If our digestive systems didn’t absorb most of what we eat than anytime you had a big meal you would have diarrhea like clockwork from the undigested material in the gut! It also makes very little sense from an evolutionary standpoint to be very wasteful with nutrients when primitive man may have only been able to eat one large meal in a day at times.

Our species would not have survived very long if we were wasteful with nutrients and did not absorb amino acids beyond a certain level.

In reality, the body has an extremely high capacity for amino acid absorption. What these people who spout this nonsense are really referring to is amino acid utilization. You see, even if we absorb 100% of the amino acids we ingest, that doesn’t mean they will all reach the skeletal muscle and input towards building muscle mass. In actuality a very small percentage are used for that role. The cells of the small intestine and liver extract a huge amount of amino acids for energy and their own synthesis of new proteins in first pass metabolism before they ever reach the bloodstream! Once in the bloodstream amino acids can also be taken up and utilized by other tissues such as the kidneys, heart, skin, etc. So it is not a question of how much protein/amino acids can be absorbed at a meal, rather the question is what level of protein at a meal gives the maximum benefit for muscle building?

Essentially anything below this level would not maximally support muscle building, while at a protein intake above this level, the body would merely oxidize the excess amino acids for energy.

In order to start answering this question of optimal protein intake at a meal we first must make clear as to what defines a “maximum level of benefit” from protein intake. Using rates of protein synthesis as a measure for this definition is logical as increased rates of protein synthesis would be required for the addition of new skeletal muscle tissue. To put it more plainly, in order to build muscle the body must increase the rate at which it synthesizes muscle tissue above the baseline rate. Decreasing the rate of skeletal muscle breakdown also can lead to increased tissue accrual, unfortunately data on protein breakdown is much more difficult to obtain, interpret, and it is much more variable than the synthesis data.

It is very difficult to measure short term changes in skeletal muscle breakdown as it has a very slow turnover rate so the focus on this article will be on protein synthesis, which likely plays more of a regulatory role in tissue accrual/loss in muscle than degradation since synthesis is the more regulated energy dependant process.

To find the optimal level of protein intake at a meal we must determine what the optimal level of protein at a meal for stimulating muscle protein synthesis is. It appears that maximizing skeletal muscle protein synthesis requires approximately ~15g of an essential amino acids. It has been postulated that the amino acid leucine is responsible for the stimulatory effect of dietary protein on protein synthesis and 15g of essential amino acids would contain 3.2g of leucine. Thus in order to determine how much protein from a specific source is required to elicit the maximal response it may be useful to back calculate how much leucine is contained in the source. One could then determine how much of the source must be consumed in order to reach the leucine threshold. For example, whey protein is approximately 12% leucine per gram protein, therefore about 27g of protein from whey would need to be consumed to reach the threshold for maximal anabolism, whereas a source like chicken, which has a protein content of about 7.5% leucine would require 43g of protein to reach the leucine threshold required for maximal stimulation. So it appears that the maximum benefit level for protein at a meal is varies depending upon the source of protein. It is important to note that most of these studies were done on individuals who weighed approximately 155-165 lbs on average. 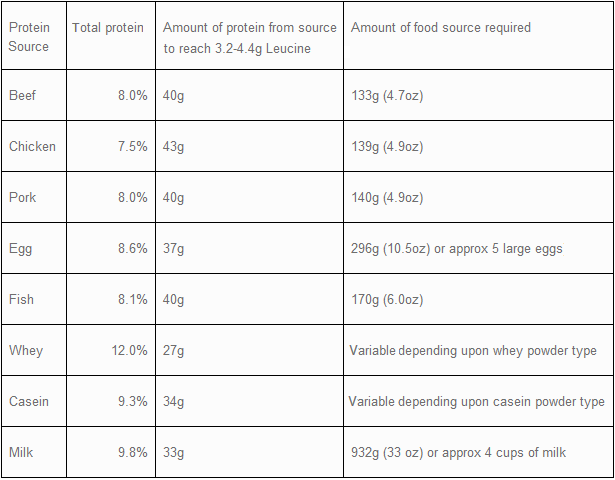 Now there is the issue of meal frequency and time between meals. Assuming we maximize protein synthesis by achieving the required leucine/protein threshold, how long does the effect last?

It may therefore be more useful to consume larger amounts of protein at a meal and wait longer between protein doses than the typical 2-3 hours that is typically recommended in the bodybuilding community.

Now I know you’ve probably spit your protein shake out all over your magazine, ruining it and now you are cursing me for 1) ruining your magazine and 2) telling you the bodybuilding meal eating protocol you’ve been following for so long may not be optimal for making gains.

Well I apologize for ruining your magazine but I won’t apologize for busting on musclehead dogma; that is just what I do. There is some precedent for what I am recommending however. Arnal et al compared elderly women consuming either 4 small meals per day with their total protein intake evenly spaced out verses those that consumed the same amount of protein but with 80% of their total protein coming in one meal. The researchers found that the women consuming the large single dose of protein actually had greater nitrogen balance, protein turnover, and protein synthesis rates than the group consuming their protein across four evenly spaced meals. Now the total protein intake for both groups was only 60g so the group consuming protein evenly only consumed 15g at each meal. Still it is interesting that the group eating almost all of their total protein in one meal had better results. Perhaps the group consuming the small meals never reached the threshold required to initiate a significant response of protein synthesis at any meal whereas the bolus dose group ate enough protein in at least one meal to initiate have one significant increase in protein synthesis above baseline during the day. Now I am not in any way shape or form implying that we are better off just consuming one large protein meal per day. What I am implying is that it is better to consume larger protein doses spaced further apart and maximize protein synthesis, rather than consume smaller doses of protein throughout the day, since research has shown that protein synthesis will become refractory to constantly elevated levels of amino acids.

It may be that a period where amino acids return to baseline or near baseline is required in order to initiate another bout of protein synthesis. I therefore suggest that one consume 4-6 larger protein doses per day instead of 6-8 meals and wait 4-5 hours between meals rather than 2-3 hours.

At the moment, there is no clear way to overcome the refractory response. However, there is evidence that supplementing with free form amino acids with carbohydrates between meals may improve protein synthesis compared to normal meals alone. It is possible that a free form amino acid supplement could spike plasma levels of amino acids to a far greater level than can be achieved with whole foods and perhaps this supraphysiological response is enough to overcome the refractory response. It is also possible that the carbohydrates in the supplement have an effect.

The insulin time course in the experiment we performed lasted 3 hours, the same as protein synthesis.

Additionally, Wolfe et al. also showed that the timecourse of insulin seemed to track protein synthesis during an essential amino acid infusion. Perhaps maintaining elevated plasma insulin levels is required to prolong protein synthesis in response to a meal. In either case, it appears that supplementing with an amino acid supplement containing ~2-3g of leucine along with some carbohydrates (~20-30g) is an effective way to maximize muscle protein synthesis.
Now I will be the first to admit that the research is just not specific or broad enough to address the size and frequency issue with absolute certainty, but I believe these recommendations are a good general starting point.

What is clear is that certain protein sources have a stronger impact on protein synthesis than others, and also that it appears that keeping amino acids constantly elevated by smaller protein doses throughout the day may NOT be optimal. Hopefully future research will address more specifics with regards to these issues.