Flip through this magazine and you’ll see plenty of advertisements for protein powders. Bodybuilding novices may dismiss these as they jump from article to article. Experienced bodybuilders, however, know better. 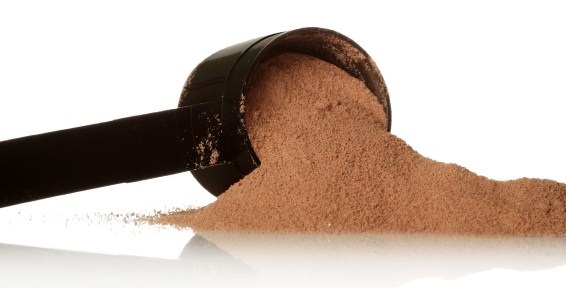 For those who are serious about training, diet and supplements, perusing the ads is key to gaining information. Think about it you would never hear a car aficionado complain about ads for a new Porsche in Car and Driver. Macworld magazine would suck without the adverts for all the new games and programs coming out. Hell, you’d never hear a pom collector complain about the ads for the new Jenna Jameson video in Hustler. They want to know what new stuff is out there, just like you should. Even for supplement-savvy trainers who see ads as a way to keep track of what’s available, it still can be confusing to sort through all the different types of proteins available today.

Do you really know what properties make whey proteins different from casein proteins? Did you realize that, despite years of negative press, soy is a good source of protein for male bodybuilders?

Our complete guide to protein powders will give you a refresher on what you may already know, as well as fill you in on everything you don’t know when it comes to the supplement that every bodybuilder should have in a nutritional arsenal. Read on then take the time later to check out the ads. Sure, we love ’em because they help pay our bills, but the products in those pages can pay major dividends for you, as well.

Powders with protein derived from cow’s milk are the most popular on the market today, and they include whole milk, casein and whey.

Milk protein is separated from lactose and fat by a gentle filtration process that leaves both the major protein components of milk intact. Of those two proteins casein and whey casein is far more prevalent in the mix. Casein accounts for approximately 80% of the protein in milk; whey, approximately 20%. Milk proteins are good for use between meals and before bedtime, as casein digests slowly and delivers a steady supply of amino acids to muscles. Since whole-milk protein also contains whey, which digests quickly, these protein powders can be used before and after workouts. They are not optimal, however, due to their relatively low whey content.

Milk proteins are usually listed on ingredients labels of protein powders as one of the following.

MPC has a protein content of about 80% and a lactose content of approximately 5%. MPC is typically produced by ultrafiltration, which employs varying degrees of pressure to force only the liquid (water) portion of the milk through a porous membrane. The larger proteins cannot pass through the membrane and are collected for further processing that usually involves evaporation and a drying process. The result is an MPC powder.

MPI is usually made by precipitating whey and casein proteins from skim milk. This often involves diafiltration, a membrane process that uses water to wash out lactose, producing an MPI that is about 90% protein and very little lactose or fat. 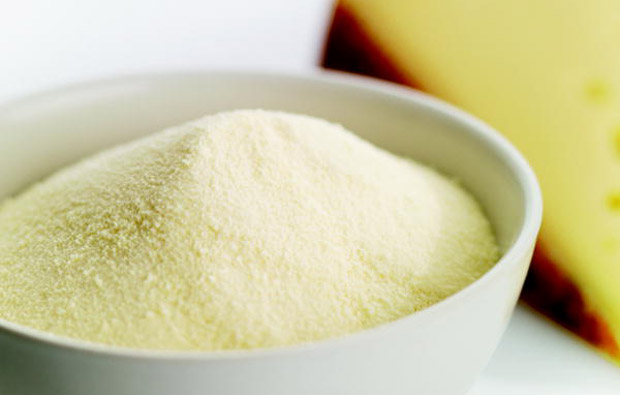 The major protein component of milk exists as tiny micelles (globules). They are insoluble in liquid and take longer to digest than whey or vegetable proteins; some forms take up to seven hours to fully digest. This means they provide a slow and steady release of amino acids to the body. These slow-digesting proteins are great for supplementing between meals and before bed whenever you won’t have a chance to eat for many hours.

Having a steady supply of amino acids for your body will help prevent the muscles from being broken down for their amino acids. Look for the following types of casein on the ingredients lists of protein powders.

MC is usually made by separating the casein portion of milk from the lactose, fat and whey via microfiltration. This low-temperature process uses ceramic filters that don’t denature (damage) the casein protein, yet they remove the large fat globules that ultrafiltration cannot. Micellar casein can form micelles upon rehydration, which makes MC less easy to mix in liquids, but makes it the slowest digesting of the casein proteins. For this reason, many protein manufacturers use MC in protein powders designed specifically for nighttime use.

HCP is formed by the hydrolysis of casein protein. Hydrolysis breaks the bonds between amino acids, making shorter-chain proteins. Unlike other casein proteins, HCP powders are digested and absorbed rapidly, making them good to use before and after workouts.

Depending on how much of the protein is hydrolyzed, some powders that contain HCP have a slightly bitter taste due to the shorter protein fragments. 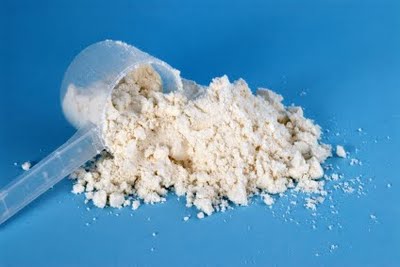 Whey protein in protein powders comes in the following forms.

WPC is usually manufactured via ultrafiltration and diafiltration processes. These techniques leave most of the protein fractions in whey intact. Most WPC products contain 70-80% protein and, therefore, they contain a small amount of carbs and fats that is, while whey proteins are generally quickly digested, WPC is the slowest of those available. 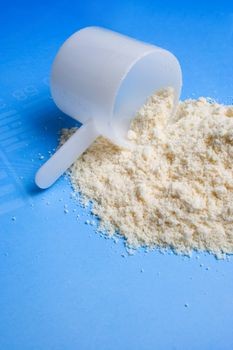 WPI is purer than WPC because the isolate is processed even further than the concentrate through longer filtering or ion-exchange chromatography (a method that uses ionically charged resins and chemicals, such as hydrochloric acid and sodium hydroxide, to separate protein). Most WPI products are more than 90% protein. The disadvantage is that some processing techniques used to make WPI remove some of the beneficial protein fractions.

Due to its lower carb and fat content, WPI is a slightly faster-digesting protein than WPC.

WPH is produced when WPC or WPI is taken through the extra step of hydrolysis to break the amino acid bonds. This makes it the fastest digesting protein available. Like HCP, it can have a bitter taste depending on the amount of hydrolysis it undergoes.

It may not have the best taste because of the bitterness, but that attribute does indicate a higher amount of smaller protein fractions and, therefore, that it is an extremely fast-digesting protein. This is the best type of protein powder to use immediately after workouts.

Like protein derived from cow’s milk, the two major proteins in goat’s milk are casein and whey. Some people are allergic to a specific casein protein in cow’s milk; this has prompted the recent development of goat’s milk protein powders. Also, most of these protein powders come from goats that are not fed pesticides, herbicides, growth hormones or antibiotics. Another advantage is that the casein in goat’s milk is easier and faster to digest than the casein in cow’s milk.

Goat’s milk protein powders are good to use before and after workouts. One warning about goat’s milk-derived protein powders: most are not flavored, and some people find them difficult to tolerate without added flavors.

Most goat’s milk protein powders are manufactured in a fashion similar to MPC. Therefore, their protein content can vary. Most contain about 65% protein, with the rest being fat and carbs.

Before whey was all the rage, egg protein was considered the gold standard of protein powders. It is still one of the best protein powders that money can buy, and it offers benefits that whey doesn’t.

Egg protein is still one of the highest-quality proteins available. It is virtually devoid of carbs and fat, and it is readily digested and absorbed. It is a great pre- and postworkout protein. Egg-white protein is high in sulfur-containing amino acids. These aminos are critical to the body’s hormone-producing pathways. It’s a good choice for those who are allergic to cow’s milk proteins and for those who do not regularly consume eggs. Many egg protein powders now contain avidin-neutralized egg-white powder avidin is a glycoprotein in egg whites that depletes the body of biotin (an essential vitamin that performs critical roles in the metabolism of fats, proteins and carbohydrates, and is important for optimal health).

In this category, most are sources of incomplete proteins, but there are a few exceptions. The obvious one is soy protein; lesser known is hemp protein.

Soy protein is a complete protein yielding all nine essential amino acids. It is produced using defatted soy flakes that go through a water or alcohol extraction process to remove the carbs. The flakes are then dried and ground. The resultant soy protein is rich in glutamine and arginine, and it is digested and absorbed quickly. It also provides antioxidant effects and a multitude of health benefits. This makes it a good protein to use before and after workouts. Many bodybuilders fear soy protein due to the fact that soy contains high amounts of isoflavones that impart estrogenlike effects in the body. They worry that the isoflavones would compete with the anabolic effects of testosterone. However, research on soy in bodybuilders should allay those fears. When male bodybuilders consumed a soy protein shake twice a day for 12 weeks, they gained an equal amount of muscle mass as those consuming a whey protein shake twice a day. Plus, the soy protein had no effects on their testosterone or estrogen levels.

Soy protein is listed as follows on ingredients labels.

Most hemp protein powders are about 50% protein. The protein in hemp is complete, and it comprises mainly edestin (about 65% of hemp protein) and albumin (about 35%). Hemp protein is manufactured from hemp seeds that are cold pressed to extract the oil. The pressed hemp meal is then cold milled to separate the protein. Hemp protein is rich in branched-chain amino acids (BCAAs), arginine, essential fatty acids (EFAs) and fiber. Due to the fat and fiber content, this protein is good to take before bedtime and between meals.

Because all proteins have individual benefits, the best bet, if you can afford it, is to buy containers of whey, casein or milk, egg, soy and even hemp protein powders. Mix the whey, egg and soy proteins at a 1:1:1 ratio and use 20-40 grams (g) (one to two normal scoops) first thing in the morning to stop the catabolism that has occurred during the night. Also, use this protein mix before and after workouts. Before bedtime, mix casein or milk protein powder with hemp protein powder and take 20-40 g to provide a steady supply of amino acids to your body to prevent muscle protein breakdown while you’re asleep. You can also use this mix between meals when you know your next meal won’t be coming for several hours.

A cheaper option is a mixed protein powder that contains several different protein types. Be sure to get one that contains whey along with other proteins such as casein, egg or soy. These can be used at any time of the day to provide both fast- and slow-digesting proteins to supply amino acids in both a quick blast and steadily over several hours. 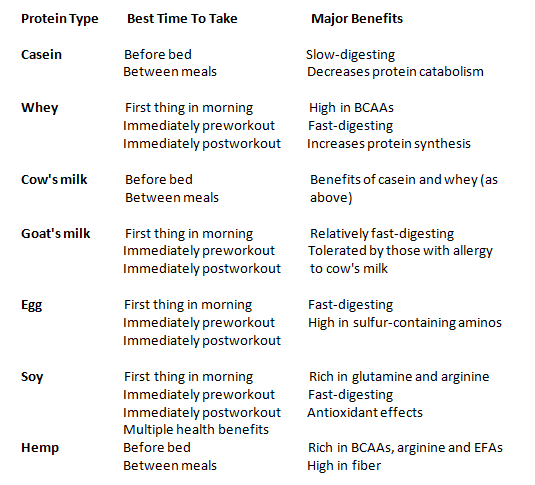